5K Gems
Geopet Go is a feature that allows players to find and collect virtual pets in the real world. It brings digital components into the player’s perception of the world and uses the mobile device's GPS to locate hatcheries and pets which appear as seemingly real creatures. This allows players to encounter and catch virtual pets as if they were a part of the physical world.

Geopet GO includes, among other features, lures to attracts pets, collectible eggs, and hatcheries where players can collect eggs.

Players can encounter collectible pets around the world and in their local environment. When players find themselves near a pet, it will appear on satellite imagery and players can begin their adventure to catch

Players can encounter pets from all factions in the wild with the exception of the Kappa and KappaPride pets. They are exceptionally rare and cannot be tracked down in the wild and will not be scattered around the map like the other factions. They appear by mere chance as players go about their business.

Players can catch a maximum of 50 pets per day through Geopet GO: 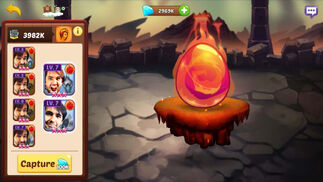 Hatcheries, when captured, gives the player collectible eggs at a steady rate. Hatcheries belong to one of six factions, and players can hold one hatchery of each faction at any given time. To capture a hatchery, players must use a team of streamers, which all must be of the same faction as the hatchery being captured. The strength of that team determines how long the hatchery will be held for. Thus, a stronger team means a longer time the hatchery will be held. After a hatchery is captured it will produce eggs that correspond to the hatchery’s faction.

Your captured hatcheries will generate a total of 50 eggs per day, among all factions. These will not split evenly over the different factions, it purely depends on what factions are captured and when.

After players capture a hatchery, a pet of the same faction will become active in place of hatchery for the limited time it is held for. This means that the active pet will have it's unlocked passive abilities activated, granting the player additional passive buffs. But, this does not include the pet's first ability - the auto-skill ability. To activate this ability on the pet see the Loyalty Tree. Players can see their active pets in the hatcheries section of Geopet GO. They can also change this active pet by clicking on the pet and swapping through different pets of the same faction that the player has in their collection.

Eggs are organic vessels that contain pets. Players obtain eggs from hatcheries that issue them at a steady rate, around a four-hour interval, to the controlling players. There is one egg for every faction, and they produce pets from the same faction as the eggs. Players can hatch the egg in Match-3 Pets by completing a puzzle minigame that 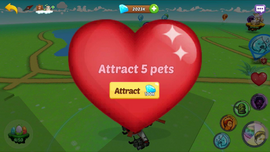 The heart-shaped button activates a widget that attracts five collectible pets. It costs 100K Gems and players can use it as many as they want. Once the widget is activated, the player will instantly be able to claim the five pets. Players can earn free pet attracts by enabling notifications within the Settings.

Retrieved from "https://clashofstreamers.fandom.com/wiki/Geopet_GO?oldid=4885"
Community content is available under CC-BY-SA unless otherwise noted.