Faction stars are unlocked after the player has reached account power level 1, and reached prestige 1 in the Campaign Tower.

Faction stars temporarily enhance the stars of your streamers when put in combat. When clicking on the faction stars icon in a combat building, players can see the different bonus stars applied to each slot. Depending on your team composition (what streamer is in what slot), their stars will increase by the number of stars shown on that same slot. Each slot's star boost is derived from that faction's most powerful streamers, pets and event artifacts. Players can see how much their streamers' power is increased from the faction star bonus by looking at the power boost found in the middle. 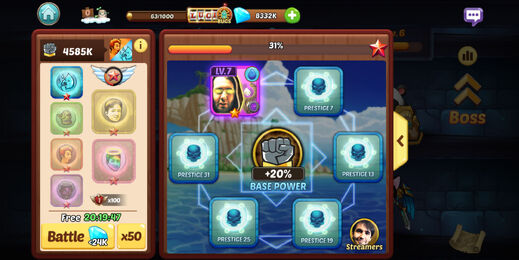 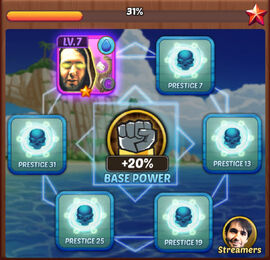 As players progress in the Campaign Tower and reach higher prestiges, players will unlock more areas to equip their most powerful streamers, pets and event artifacts, therefore increasing the total star boost in that faction slot. Players can see how close they are to adding an additional star by looking at the progress bar at the top. The progress bar is determined by the streamers, pets and event artifacts already equipped from that faction.

Retrieved from "https://clashofstreamers.fandom.com/wiki/Faction_Stars?oldid=4909"
Community content is available under CC-BY-SA unless otherwise noted.