The Boss Tower is a challenging game mode where players can send their team of streamers to fight bosses in exhausting battles that can last up to eight hours. The tower works with a concept called auto-battle that allows players to go about their business as usual while the boss fight takes place. Once the fight is over, players can claim their rewards, which usually includes a substantial amount of Gems, and watch a special replay of the fight to assess how their team matched up against the boss. The Boss Tower contains multiple levels where the bosses become increasingly more difficult to defeat as players progress in the tower.

Since fights last for eight hours, players can go about their business as usual because of the auto-battle functionality that allows the battle to run in the background of the game. When the battle is over, players can watch a replay of the fight. The replay is fast-paced and last a couple of minutes, summarizing the entire fight in just moments. 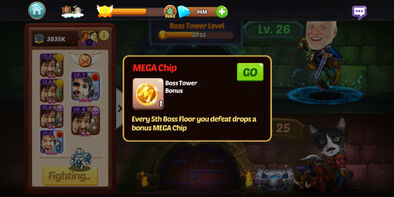 After every 5 levels (bosses), players are given an additional chest reward containing some form of very valuable loot. This loot alternates between a free Mega spin and a free PogChamp summon. This loot can be previewed by tapping on the chest beside the boss.

Retrieved from "https://clashofstreamers.fandom.com/wiki/Boss_Tower?oldid=4705"
Community content is available under CC-BY-SA unless otherwise noted.