The Arena is a player versus players (PVP) game mode where players compete for glory and rewards. Players can fight against other players to earn stars which are necessary to move up in the divisions. In the hopes of moving up through the ranking system, players must assemble their team of streamers in elaborate ways to defeat other players.

The ranking system has the following divisions: Bronze, Silver, Gold, Platinum, Diamond, and Challenger. Every division has five subdivisions that players must battle through to advance in the system. Unlike other competitive games, players cannot lose any progression including stars, even when fights are lost. Players can only progress forward.

The arena system has three leagues: the Mega League, the Madness League and the Insanity League. Players start off in the mega league and can eventually advance to the insanity league.

Once a player reaches the highest ranking of their league, Challenger, they qualify to a tougher league with more challenging opponents and better loot. Advancing in leagues places the player in Bronze 5, the lowest rank, and puts the player at a disadvantage by making the opponents stronger. 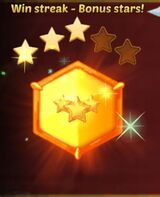 Players typically earn one star per arena victory in ranked mode, but players can also receive multiple stars by winning multiple matches in a row. Winning streaks, therefore, grant additional stars and allows players to progress faster through the arena system. There are three types of win-streaks:

An arena season lasts a month and resets the leader board including the player’s rank. Players are rewarded based on their final ranking, and they are afterward placed back in Bronze 5 (in the Mega League) where they have to progress through the ranking system once again. The reset will take place on the 1st of every month.

At the end of each arena season, players are rewarded with items depending on their final standing. Some of these rewards might include various resources such as: Gems, scrolls, tokens, chips, tickets, and more.

Players can preview seasonal rewards for each division and league by tapping their division badge in the ranked mode of the Arena.

Before starting a battle, players can view their next opponent and their team by clicking on their avatar. If players dislike their opponents, they can change them by pressing the “refresh” button and are given a different random opponent.

Casual games are the unranked alternative to ranked matches. A casual game is free to play, unlike ranked games that cost a small number of Gems. In casual, you cannot progress through divisions or leagues and reap seasonal rewards.

Retrieved from "https://clashofstreamers.fandom.com/wiki/Arena?oldid=4706"
Community content is available under CC-BY-SA unless otherwise noted.