20K Gems
Achievements provide loot and passive buffs upon completion. They cover every aspect of gameplay, from the comical to the heroic. Completing achievements gives a 0.1% increase in one aspect of the game, typically associated with the achievement in question. For example, players might a receive a 0.1% summoning cost reduction after summoning a number of streamers. Also, completing an achievement rewards the player with a chest that contains valuable loot.

On the main page, there is a trophy that represents the achievements. Tapping that trophy redirects to the list of all achievements. Every achievement appears with its name above itself, which serves as a small description of the task at hand. Each achievement also has a progress bar and a chest enclosed in chains. The chest releases itself from the chains and is ready to be claimed after a player completes an achievement.

Achievements cover every aspect of the game. Anything from collecting streamers to constructing buildings to winning tower battles. All achievements are progressive. For example, one achievement requires players to collect 100 streamers, and once completed, players must collect another 100, and so on. All achievements relate to this very concept of doing something multiple times, whether its 100 kappa summons or 33 daily quests. It is for this reason that the game is almost impossible to complete.

Passive buffs are rewards that provide a 0.1% increase in a particular area of the game, typically related to the achievement in question. There is a multitude of buffs such as hero improvements, summoning odds, upgrade chances and so forth. However, 0.1% might seem insignificant, but players can stack these buffs to earn a substantial percentage increase in one aspect of the game. This improves the player’s prospects of dominating the game. 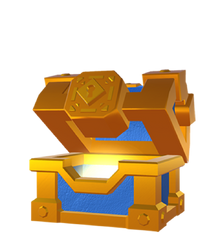 Completing an achievement rewards the player with a chest. It contains a range of items that can be amplified by chance in multiple ways. Like many other features, the chest has a chance to trigger a multiplier and a legendary loot table.

However, these loot amplifiers are not available right away. Players unlock them gradually by upgrading the achievement building through the garrison.

Each achievement has a chance to give you a different level chest by default, where the more hard to reach achievements grant higher level chests, and vice versa. The higher level a chest is, the better loot it contains. Chest levels can be upgraded when being opened by triggering multipliers.

Retrieved from "https://clashofstreamers.fandom.com/wiki/Achievements?oldid=4696"
Community content is available under CC-BY-SA unless otherwise noted.